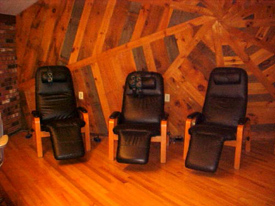 Simply stated, meditation is a mental technique for the elimination of NON-PRODUCTIVE THOUGHTS and EMOTIONS: anxiety, over intellectualizing, irrationality, the inability to remain focused through complexity and pressure, limiting assumptions. The tactic of meditation is to short-circuit this non-productive process so that "higher circuitry" can be experienced. This is often referred to as higher potentials of the human mind with which the mechanism of the brain often interferes. Non-productive thoughts originate in the electro-chemical processes of the physical brain. It is not a very profound insight to realize that the chaos and essential disharmony of the exterior world is actually the projection of our interior state of mental dysfunction. The techniques for creating more efficient mental and physical coherence are not new.

The traditions of the East are highly sophisticated systems for eliminating non-productive "static," so that the brain will not interfere with the mind discovering its true nature, its potential for higher functioning and creativity. As "mystical" as this may sound, one must pass beyond the defining metaphors of each particular culture and understand that the goals of the exotic, ancient schools of meditative practices are not that far removed from those of DAGAZ VISUAL SOUND SYSTEM. The wise men of the past believed that REALITY is not a fixed or unchanging concept, but that it is a CO-CREATIVE PROCESS. That's the essential belief behind DAGAZ: ELIMINATE NON-PRODUCTIVE THINKING AND CHANGE YOUR REALITY! This is not esoteric "mumbo-jumbo." It's practical. It's attainable... and the technology is here! Before we delve into the particulars of how DAGAZ VISUAL SOUND SYSTEM accomplishes this elimination and "tuning" process, let's take a minute to consider the evolutionary basis of our neurological discord. This is the "human condition" that is the "stuff" of so much art and music.

THE BRAIN: Packed into this three pound package is about 100 billion cells. Each of these cells are linked to thousands of other cells in an astounding electro-chemical circuitry consisting of trillions of connections that control everything we taste or touch, do or say, see or think. If this overwhelming complexity isn't enough, we really have three brains: three separate parts with their own functions and history. It is a TRIUNE BRAIN: part reptilian, part mammalian, and part that's uniquely human. Each of these parts has its own intelligence, memory, motor skills, and specialized functions. For survival reasons, Nature didn't cancel any of our evolutionary programming, but superimposed these parts. In addition, our "human part" is divided right down the middle into the right and left hemispheres. Each is responsible for a different "way" of processing incoming sensory data. The right hemisphere is more comfortable with Rhythm, images, imagination, daydreaming, color and dimension; the left with language, logic number, sequence and analysis.

The problem has to do with the "wiring" of all of this. Nature is still evolving the neurological network that links this staggering diversity and complexity together. Nature is still tuning the instrument. This is where DAGAZ VISUAL SOUND SYSTEM fits in. It is an ironic development, considering that much of our modern lifestyle has added to the previously discussed "state of disunion." Technology has come full circle from enslaver to savior. Experience is always the best teacher. You've read these words. Now get set for an adventure. You can't play Mozart on an untuned piano. Tune that brain! Eliminate non-productive thinking and let the symphony begin!